The Steam Deck is an utterly incredible device. It’s basically a tiny PC that can play most of the huge triple-A games in addition to your standard indie games, but its party trick is that you can choose to take it on the go in handheld mode or plug it into the best Steam Deck dock and use it as a full Linux desktop. Yet there’s something that’s been bugging me about the device, something I couldn’t quite put my finger on until very recently.

It didn’t hit me until playing Crisis Core: Final Fantasy VII Reunion, which is a remaster of a former PSP exclusive, that the Steam Deck doesn’t have the same system seller exclusives you’d expect from a new console. PlayStation has God Of War, The Last Of Us, and Ratchet & Clank. Xbox has Halo, every single Bethesda game (now), and Forza. Nintendo has Pokemon, Mario, Zelda, Kirby, and several more. What does the Steam Deck have as a system-seller? Aperture Desk Job? It’s something I’ve been thinking about for quite a while now, and I feel like I know why it’s been bugging me.

The Steam Deck is basically perfect. Sure, it could use some software updates – the fact you can’t install games while the device is in sleep mode is baffling – but the hardware is incredible and it has the most extensive back catalogue of any new device. What would ascend the Steam Deck to the next-level is some incredible exclusives, even if they’re smaller games like the aforementioned Aperture Desk Job (basically a glorified tech demo to show off the Steam Deck’s capabilities while set in the same universe as the Portal and Half-Life series).

The ideal Steam Deck exclusive would take full advantage of all the technology available while also bringing something new to the table, similar to how a game such as Astro’s Playroom show off the sheer capabilities of the PlayStation 5 and DualSense controller while also being a full game. Don’t get me wrong, Aperture Desk Job is great, but it’s no more than an hour long and acts more as a tech demo than a full game, whereas Astro’s Playroom feels like a full platformer. I don’t have a particular preference for what I’d want this release to be (though as people close to me are acutely aware, I’m partial to a platformer or a JRPG release, so one of those would make my Christmas). 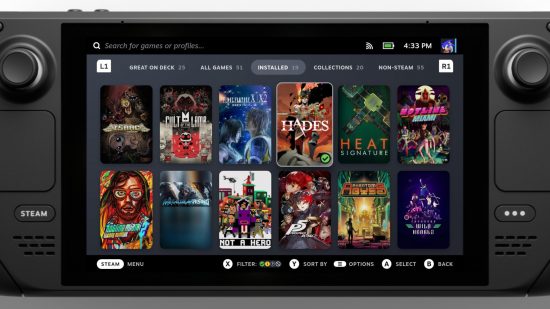 Alternatively, ports of former exclusives such as Crisis Core: Final Fantasy VII are incredible on the device, feeling like a natural fit (owing likely to the fact that Crisis Core: Final Fantasy VII was originally made for a handheld, and Reunion doesn’t change too much from that original vision), so it’d be quite nice to see more of that. Quite infamously Nintendo doesn’t like to share, preferring to port first-party games to future iterations of its own systems rather than PC, but Sony no longer feels so strongly about that.

Give me a port of Metal Gear Solid: Portable Ops, give me a Tearaway port, give me a port of Uncharted: Golden Abyss after it’s been treated as the red-headed stepchild of the Uncharted series all these years. By not porting these games with even the most basic amount of changes (just giving them a PC options menu, really), money is left on the table. The amount of people that would willingly buy PSP and PS Vita games in order to play them on a more powerful system that can run them at 60fps with a huge swathe of options is massive, yet there’s no sign of any ports – unless you count Persona 4 Golden. It’s why older games such as the Final Fantasy Pixel Remasters (Shout-out to John Phipps at SDGC, we finally got them ported!) work so well on the Steam Deck, and it’s something that extends to ports of newer titles.

C’mon Sony, give us a sign of respect for your handheld library. Failing that, c’mon Valve, give us a nice Steam Deck exclusive that takes full advantage of the system. It doesn’t necessarily have to be Portal 3 and Half-Life 3 necessarily, it just needs to be a fun time for people that want an exclusive – although both of those are sure to sell the system in droves…