I’ve avoided the best Assassin’s Creed game since 2014 and it’s all my own stupid fault. In the days and weeks following the release of Assassin’s Creed Unity, I watched in horror as faceless character models flooded social media, dampening a launch that was already muted by a tepid critical response. According to Metacritic, Unity has the lowest overall review score of any mainline release in the series.

To be fair, the bugs are very bad. And it’s not just the obviously frightening faceless glitch, which sees otherwise sincere cutscenes rendered like something out of Hellraiser, with melting skin and floating eyeballs wrapped up in a moving basket of matted, low-poly hair. The more free-flowing parkour system and robust sword-fighting overhaul come with their own foibles, and it certainly is frustrating when protagonist Arno randomly disengages from a bloody brawl or when you get stuck between a few different objects instead of elegantly leaping through an open window. But the rest? The rest is arguably the most perfect distillation of the series’ gameplay and intentions to date. It’s one of the best action adventure games. And Unity, more than any other Assassin’s Creed game, makes you actually feel like an assassin.

Main missions typically take the form of unguided assassination sandboxes. You have a single target, a massive location within which to sneak through and locate them, and complete freedom as to how you close the distance on your target. The closest thing to hand-holding is a quick reel of potential entry points and hiding spots that plays out at the start of each level – you can explore these or find your own route, it’s totally up to you.

And the locations themselves deserve a special shout-out. Sprawling neoclassical palaces, heaving city squares where crowds bay for blood by gallow or guillotine, even the battlements of the Bastille. Each one presents unique challenges and opportunities. The palaces are dynamic puzzle boxes in which you can seamlessly switch between stalking corridors and blending into the crowds of partygoers, hopping between open windows and changing floors with ease to clear out different sections of the building. An assassination mission set during a public execution is all about using the crowd to your advantage, with almost no vantage points to scale. In the Bastille, however, it’s all about clever parkour, finding blind spots in the guards’ patrol routes and using your wrist-mounted crossbow to pick off snipers before taking on the fortress proper. 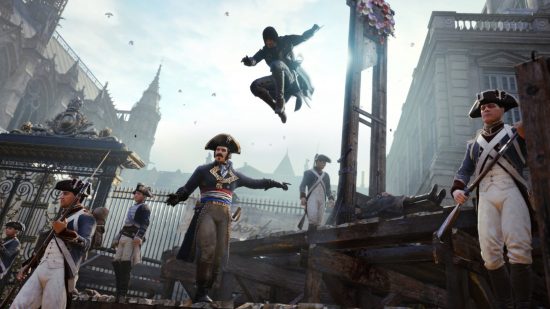 Even the side quests and collectables focus on pick-your-own-path assassinations. Most locked chests are hidden away inside buildings or courtyards full of guards, which provide hundreds of miniature hits that you can simply stumble upon as you explore the city.

Combat is simpler and much more punishing too, so you can’t realistically expect to emerge victorious when picking a fight with a large group of enemies. Instead of being able to safely fall back on defensive moves like blocks and counters, Arno can only parry – if you mistime it you leave yourself totally vulnerable to attack, and you can only score a successful riposte if you land a perfect parry. Enemies don’t politely queue up to take a swing at you either, so you can face multiple strikes at the same time, and even a cowardly pistol shot. The combat feels better – dare I say, but it’s not a million miles away from the precise timing of a good Soulslike – but it’s so much tougher that you can only use it when you’ve already cleared out the rest of the guard population.

Compared to modern Assassin’s Creed games, your arsenal is also very limited. You can use your crossbow to land silent headshots, a pistol to stymie enemies in a brawl, or poison darts that send guards into a frenzy so they start attacking each other. Smoke bombs give you a quick escape option, but these tools form the basis of your arsenal, and you’ve got to think very carefully about how you use them in each mission as they’re not easy to replenish. Sending a guard in a busy ballroom into a frenzy, for example, will draw every other guard in the area into a fight, which has the positive effects of creating a big distraction and thinning the herd, but leaves you with one area that’s packed with enemies to avoid. 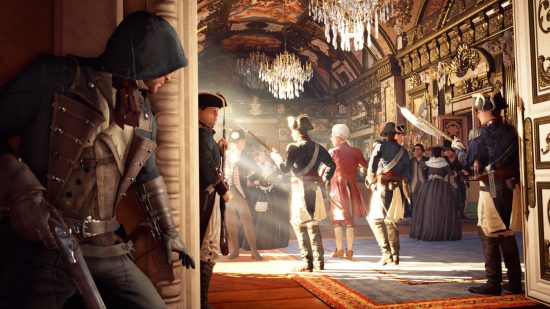 Unity’s approach to gear is also refreshingly simple compared to the series’ recent RPG game leanings. You get new pieces of armour and weapons by looting chests, completing missions, and visiting merchants, but the main bonuses they bestow on you are pretty simple: better health, ranged damage, melee damage, and stealth effectiveness. There are a bunch of smaller benefits you can sift through if you want to perfect your assassin, but it’s completely feasible to ignore this altogether and only occasionally switch gear if you come across something with a better overall star rating. It’s all there if you care, but if you don’t you’ll barely have to think about it.

The follow-up to Unity, Syndicate, set the series on a different course. Its combat revolves around quick melee combos which you can use to dispatch several enemies at once, the streets are far less busy, which makes way for horsedrawn carriages but makes social stealth nearly redundant, and new traversal gadgets like the grappling hook make navigating enemy areas almost too simple. These elements are expanded upon in Origins, Odyssey, and Valhalla, making Assassin’s Creed Unity the last truly successful assassin experience in the series.

My hopes are high for the upcoming Assassin’s Creed Mirage, which is being billed as a return to the series’ roots, but I’m not sure the series can ever recapture the perfect evolutionary moment in time that Unity represents. Sure, there are no ships to sail or horses to race, and yes, your Arno will be pretty much indistinguishable from my Arno by the time the credits roll, but Unity has some of the most satisfying stealth sandboxes in gaming and they deserve more credit than they got in 2014.