Chained Echoes from Deck13 and Matthias Linda is a story-driven JRPG in which you’ll follow a band of characters on their way to end a war between the three nations of the continent. Check our Chained Echoes review!

Chained Echoes is a story-driven JRPG where a group of heroes travel around the vast continent of Valandis to bring an end to the war between its three kingdoms.

Take up your sword, channel your magic or board your Mech. Chained Echoes is a 16-bit Golden Era style RPG set in a fantasy world where dragons are as common as piloted mechanical suits.

Chained Echoes from Deck13 and Matthias Linda is a story-driven JRPG in which you’ll follow a band of characters on their way to end a war between the three nations of the continent. I first heard about Chained Echoes during its Kickstarter campaign, where it raised almost twice the requested amount over the course of the crowdfunding campaign. The game was finally released just in time for the holidays, and it’s time for us to review it on PlayStation 4!

As the game began, it immediately reminded me of the start of Chrono Trigger – one of my all-time favorite games… but with a hilarious twist that I was not expecting. You’ll then be drawn into a mission that also serves as a quick tutorial. The mission goes terribly wrong, which creates the game’s initial situation and the characters’ motivation. The three nations of the continent in which Chained Echoes is set are at war, and the different characters you’ll meet in your adventure all have their own motivation to join your crew. Some ties are more shallow than others, but all in all, the cast is diverse enough to keep the story interesting. 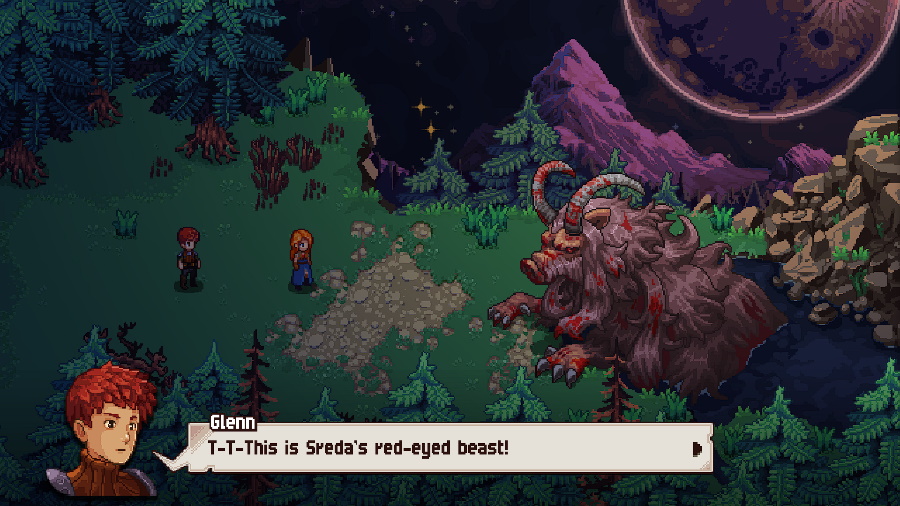 At the core of Chained Echoes is a turn-based battle system that has some similarities to Chrono Trigger in the placement of each unit, and it’s a pretty standard affair with physical attacks, skills that use TP, and items. I liked that the battle system was unlocked from the beginning, so you can experiment with it as you wish. Each character also has its own set of skills from a personal skill tree that you can unlock at your leisure. There’s also a limit-break-like bar allowing you to use a stronger attack once until it refills, which is definitively handy for boss battles.

Farther down the line, when you get more than four playable characters at a time, you’ll be able to link characters together so that they can be instantly swapped in and out of the battle as needed, in a way that is similar to how Final Fantasy X allowed you to switch characters. This was great, and since characters need to be linked in order to be switched, it leaves you with the option to select who can be changed. I wasn’t totally fond of the battle system. I personally prefer fast-paced battle systems, like the one found in Outbound Ghost.

The enemies are often sitting in an area waiting to be encountered, but most of the time, they can’t be avoided. If you just want to reach the end of a dungeon to end your play session, it might prove to be a bit of a chore. As I got further into the game and each character had a bigger set of skills to tackle battles, I noticed that the camera moved too much, and there was no option to tone it down in the accessibility menu. 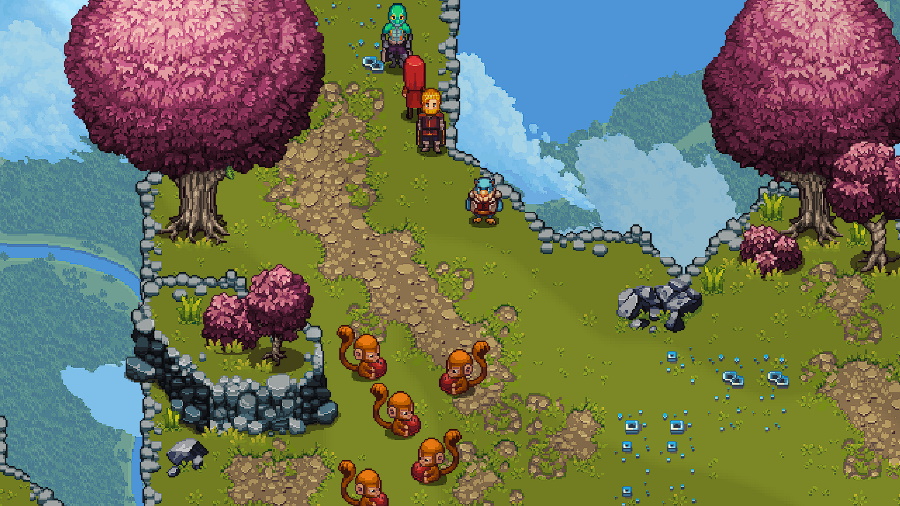 On the level design department, I thought it was generally good. Most locations are huge and reward exploring by having treasure chests scattered everywhere. I did have a gripe with the Flower Fields of Perpetua area as it requires backtracking, and since the area palette is white-ish and the stairs are nearly the same color as the environment, I missed a passage and had to run in circles to find out where to go. Another recurring issue I had, and one that could easily be fixed in a patch, was the absence of a mini-map. There’s a full map that can be opened with the Square button, but since most of the areas are of a maze-like nature, I had to open the map a few times to find my way. I would definitively have liked to have a mini-map available at all times.

One thing I haven’t mentioned yet is how you collect money in this game, and I thought that it was a clever gameplay mechanic. When most RPGs have enemies carrying money for your convenience, Chained Echoes goes into a more realistic approach, making enemies drop loot that can be sold at every store. Once you reach certain thresholds, you’ll unlock new deals, allowing you to purchase very interesting equipment and items for an amount lower than if you were to purchase them yourself. You can also upgrade your equipment with gems, giving them special abilities – similar-ish to the Materia found in JRPG classic Final Fantasy VII.

The game features a full trophy list with a Platinum trophy. The list is split into 18 Bronze trophies, 16 Silver trophies, and 3 Bronze trophies. There are trophies for completing each of the different acts in Chained Echoes, as well as for beating the game. As for the additional miscellaneous trophies, you will unlock a bunch for fleeing from 42 battles, winning 50, 100, and 200 battles, completing the reward board, finding all recruits, getting all ultimate weapons, and completing the bestiary, to name some examples. 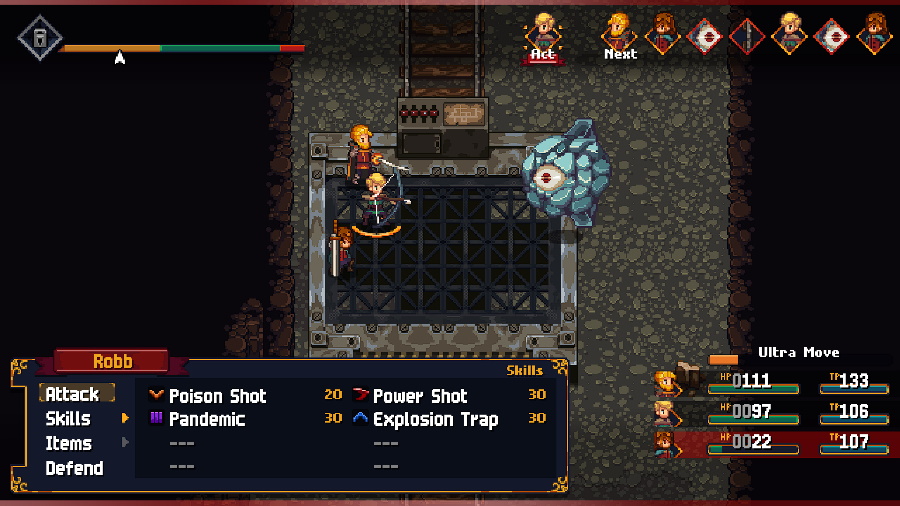 Chained Echoes is a great throwback to the 16-bit golden age of JRPGs. I liked exploring the different areas and ended up liking the battle system, even if it does feel that some enemies have way too much HP. In the story department, it’s a good one, but it unravels at a slower-than-expected pace during the first arc. Chained Echoes is out on PlayStation 4 with a $24.99 asking price.

Disclaimer
This Chained Echoes review is based on a PlayStation 4 copy provided by Deck13 Interactive.