Breakers Collection from QUByte Interactive brings us two old-school fighting games to PlayStation 4. Breakers was originally released by Visco back in 1996 for the Neo Geo, which was followed by Breakers Revenge in 1998. You could think of Breakers Revenge as an updated expansion on the first Breakers game, but it’s certainly its own thing as well! Breakers Revenge makes adjustments to the game by rebalancing things, making changes to some of the graphics when compared to the original, and it also added a new character, Saizo, while also making the final boss Bai-Hu a playable character.

Along with giving us a collection with versions of Breakers and Breakers Revenge that look and feel very faithful to the arcade, we’re also getting ranked online matches – with rollback netcode! – as well as crossplay between consoles and PC gamers. There are also online replays and an extras menu with a gallery section, a sound test section, and even an interview with someone from Visco – more on these extras in a bit. 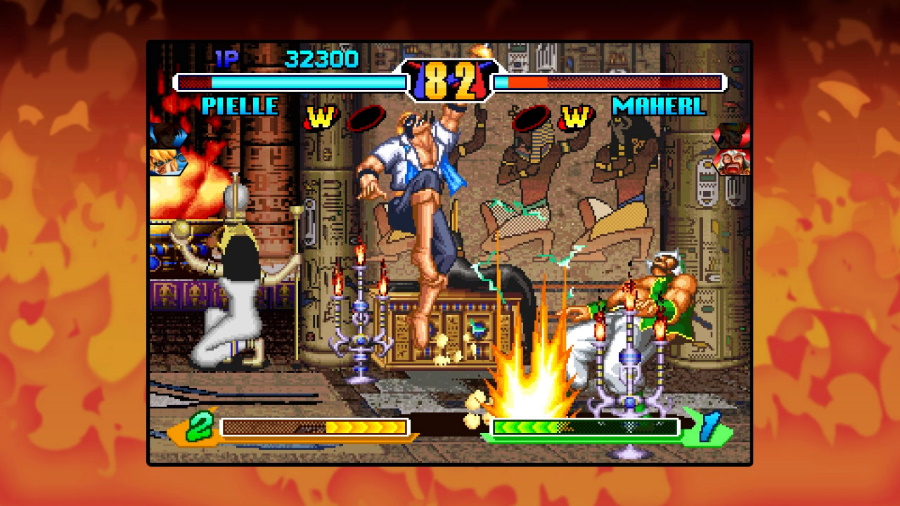 Breakers offers an Arcade Mode, a Versus Mode, a Team Battle Mode, and online leaderboards so that you can compare your performance with that of other players. Breakers Revenge has all of that as well as a Training Mode and an Online Mode so that you can take the fight to the rest of the world. As expected, the Training Mode will allow you to get a better hang of each character and how the game works.

You’ll control your character with the left analog stick or the D-Pad, moving left and right, crouching, and jumping as needed. The Square button will be for a light punch, with the Triangle button unleashing a hard punch. The X button is for a light kick, while the Circle button will be set for a hard kick. You can perform a quick recovery by pressing both kick buttons and the hard punch button or by pressing the R1 button. There’s also the possibility of customizing the controls and setting up macros for both punches, light and hard punches, light punches and hard kicks, light kicks and hard punches, and hard punches and hard kicks, which can be mapped to the remaining buttons.

Special moves are performed with the classic fighting game commands, so you’ll be performing quarter circle and half circle motions forward or backward, as well as charging up by pressing left for a second and then right, or down and then up, pressing forward then moving the controller to the down position and then back to forward, double tapping forward, and more, followed by a punch or kick button. Characters will also have unique moves that are used by pressing two punch, kick, or punch and kick buttons at the same time. 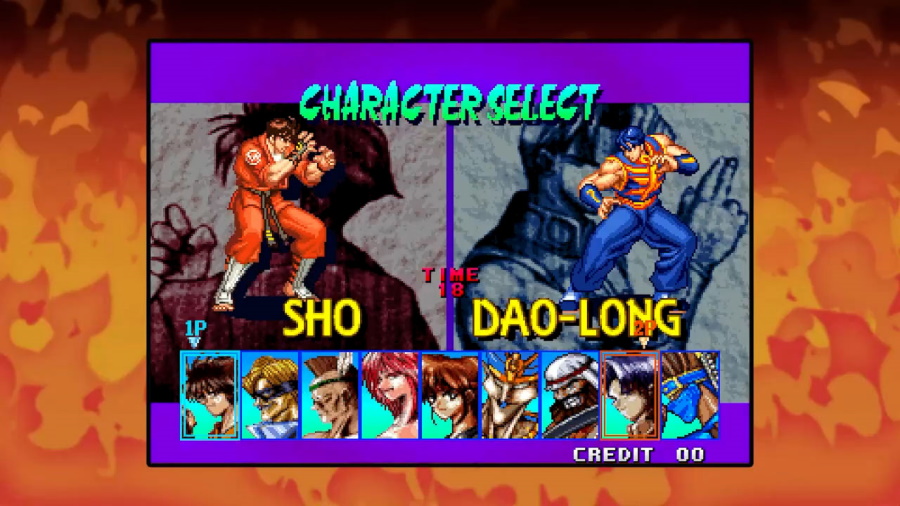 There are also super moves that each character can perform by inputting a special command, as long as they have at least one full super bar. The super move bar will fill up with every regular and special attack you perform, as well as when you’re damaged by your opponent. You can decide to use a super move during the initial round as soon as you fill up one super bar, or you might maybe want to save up a super bar or two to try and completely destroy your opponent during the second round.

You can go into the options menu to change some things to customize your experience with Breakers Collection. Along with changing the game and menu volume, you can also change the screen type, from a cube in the center of the screen to a 4:3 presentation, to a stretched image in a 16:9 aspect ratio. You can also change between three different filters – original, smooth, and CRT – along with changing between four different backgrounds or having the game select one for you at random. You can also have the game display the movelist. The last set of options is for being able to receive invites and for activating crossplay.

And along with being able to play the two games, there’s also an extras section from which you can access a gallery, a sound test, and an interview. The gallery includes a fan art section with 19 pieces, a promo art one with 11 pieces, as well as sections for each of the ten characters, with each one getting between 5 to 10 pieces of artwork. While the images in the fan art section are available from the start, most of the images for the other ones will need to be unlocked by completing objectives such as using training mode for the first time, using training mode with all characters, completing ten matches with a super attack, or winning 50 ranked matches. 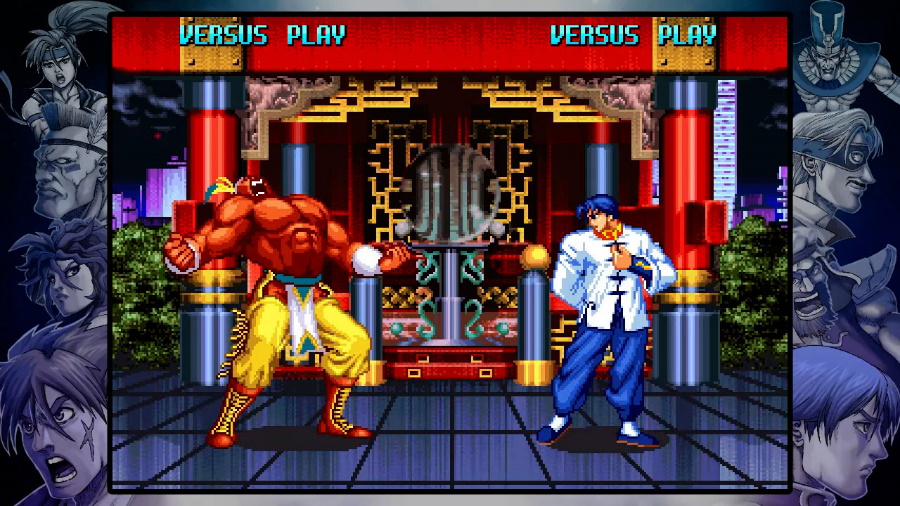 The sound test section will allow you to check out all of the game’s sound effects – with more than 500 available – as well as the game’s soundtrack in both cartridge and CD versions! And yes, there certainly is a difference between one and the other. As for the interview, it’s a text interview with Producer Tetsuo Akiyama from Visco that provides some insight on his career and his work at Visco, which developed and released games for the Famicom as well as arcade games, with several of them seeing the light of day on the Neo Geo and the Neo Geo CD.

This one has a full trophy list with a Platinum trophy, with a list split into 16 Bronze trophies, 10 Silver trophies, and 5 Gold trophies. Since this release is Cross-Buy, that means that if you own a PlayStation 5 console, you’ll be able to download both the PlayStation 4 and the PlayStation 5 versions of the game, and each one features a separate trophy list. Complete Arcade Mode with each of the characters, and you’ll get a trophy. Complete Arcade Mode in each difficulty set (Easy for 1-3, Normal for 4-6, and Hard for 7-9), and you’ll get a trio of trophies. Take the Tutorial Mode for a spin with all characters, and you’ll get two more trophies. As for the other objectives, you’ll also have to win ten versus matches, win ten versus matches in a row, and complete a round and a fight without taking any damage, to name some examples. 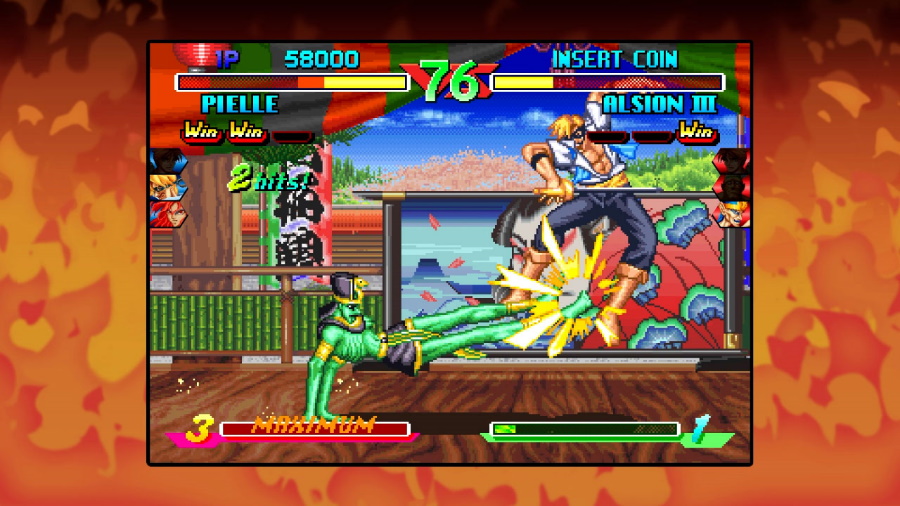 Breakers Collection gives us access to two old-school fighting games from the Neo Geo era – and Neo Geo CD era – with some quality-of-life improvements that make it possible to play against not only gamers from around the world but also between consoles gamers and PC gamers. You also get an extras section with art to unlock, songs and sound effects to listen to, and an interview with Producer Tetsuo Akiyama from Visco. Breakers Collection is available with a $19.99 asking price as a Cross-Buy title, so your purchase will give you access to both the PlayStation 4 and the PlayStation 5 versions of the game at no extra cost.

Disclaimer
This Breakers Collection review is based on a PlayStation 4 copy provided by QUByte Interactive.