Nvidia RTX graphics cards aren’t blessed with a smell we can all obsess over like the Steam Deck vent, but fear not: company eggheads have figured out the exact odour of its Ampere range. Y’know… for science.

Pretty much everyone gets a box of smellies during Christmas, so Nvidia decided to whip up its very own deodorant and shower gel set to envision the signature scent of its previous generation GPUs. Since the line-up lasted two years before the RTX 4000 series took the best graphics card crown, the smell needs to be more timeless than something seasonal like cinnamon or pumpkin spice.

Instead, the aroma is more fitting of its green colour scheme, as Ampere whiffs of citrus. The Sphynx Ampere range – which is not at all derivative of Lynx (Axe in the US) – comes alive with limonene and citronellol, giving it a distinct lemon punch. I never put much thought into what my hardware should smell like before, but it makes me wonder whether AMD Radeon would go down the berry route given that it’s team red.

Sphynx Ampere is definitely something you’d want under the Christmas tree, since it’s no ordinary shower set. Nvidia tells us that the all-new kit “not only brings you the most advanced platform for extreme freshness that you’ve ever seen, it also upgrades the performance of a traditionally uninspiring gift with its hidden secret.” 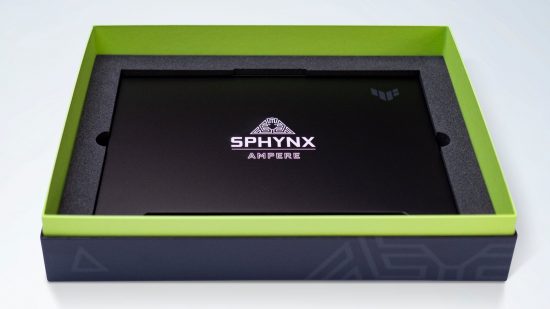 Next to the deodorant is a power pack that’s designed to charge the RTX-powered Asus or Acer gaming laptop that lies beneath a hidden compartment. It’s the kind of fake-out any parent would love to see their kid’s reaction to, as many a teen would set this aside without clocking the chonky size or weight.

Unfortunately, Nvidia isn’t going to market with the Sphynx Ampere set, so you won’t be able to “rinse with RTX” any time soon. It’s a damn shame too. I can’t speak for the “cutting-edge technology” it supposedly uses, but it smells pretty sweet.