Did you seriously think Game Hollywood Games, one of the slickest browser gaming platforms on the internet, had forgotten to get you something for Christmas?

As ever, Game Hollywood is taking advantage of a major festival by putting on a whole host of events and giveaways.

GHG Winter Fest is set to run from December 24th until January 3rd, and it will consist of a GHG Points Holiday Bonus, Winter Exchange, GHG Coins Top Up Bonus, and much more.

Plus, Game Hollywood Games is welcoming a whole new game into its ranks. Atlantis Age is an ARPG that sees you selecting from various combat styles and combining skills in infinitely varying ways.

Atlantis Age stars a cast of colourful anime characters, all romping around in a whimsical world and getting into PvP and PvE battles. There’s AFK gameplay, too, and even multiplayer AFK gameplay, as you team up with your offline friends to boost your strength.

Being a free game, Atlantis is a pretty generous Christmas present in its own right.

But this gift is joined by a ton of others. For instance, Dragon Awaken is getting a Christmas Limited Feast between December 22nd and December 28th, letting you collect Christmas stockings and other premium rewards by logging in every day and completing missions.

The Scarlet Fate event, meanwhile, gives you exclusive Christmas Characters to claim between December 19th and December 25th. A time-limited shop will remain open throughout the event, and you’ll be able to visit it to pick up Bellanche and Enil.

The Third Age event sees you collecting snowballs in order to win heaps of rewards.

Set to last from December 23rd until December 28th, this one involves recruiting troops, collecting resources from your fiefs and estates, defeating monsters, and buying event packs to earn those all-important Snowballs.

Naturally, Eternal Fury is getting in on the action too. The Eternal Fury Xmas Carnival, live now and set to run until December 27th, consists of a Christmas Wheel and a Christmas Celebration. 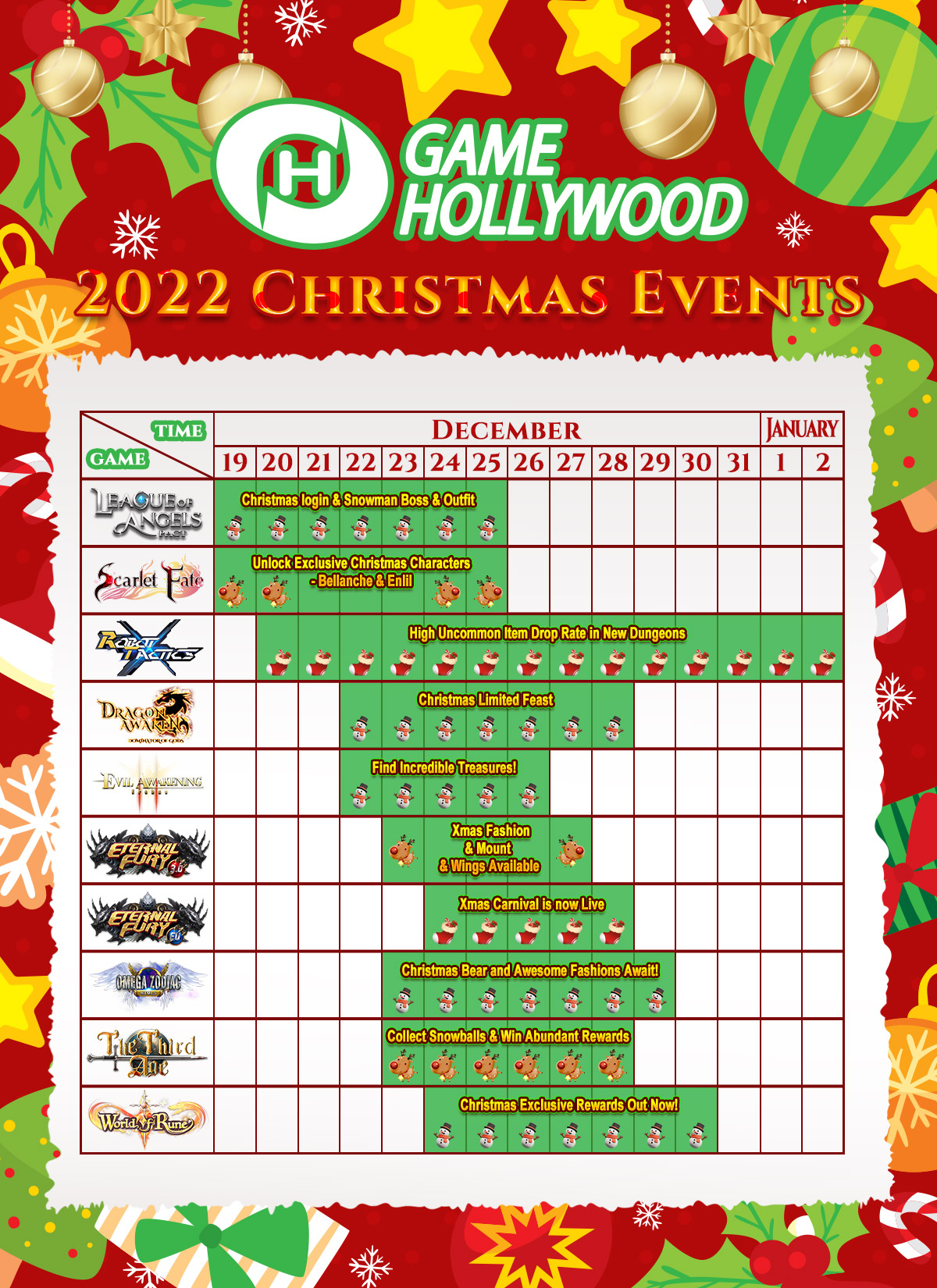 To take part, just log in every day to claim Xmas Fashion, Mount Xmas Sled, Frost Wings, and a ton of other goodies.

Eternal Fury-EU, meanwhile, is getting its own event, due to run from December 23rd until December 28th. This one also consists of a Christmas Carnival daily login event, though it allows you to win exclusive items like an SSR Hero Card, SSR Title, Avatar, and more.

Next up there’s the League of Angels: Pact Christmas Crazy Carnival. Running from December 19th until December 25th, this one sees you logging in daily for seven days to win Diamonds, Honor, and Christmas Gifts.

You can also challenge a snowman to win Christmas Bells, and visit the Christmas Exchange Shop to cash in your Christmas Bells for luxury goods like the Christmas Ode Frame, the Jingle All the Way Four Spirits Chest, Ungodly Soul, Sun Stone, Rune, and plenty of other deluxe items besides.

The Omega Zodiac Christmas Party, running from December 23rd until December 29th, sees you following Santa Claus on the map and collecting the gifts he leaves behind. If you’re lucky, you’ll pick up a unique Christmas Bear and the Candy Cane weapon.

There are special outfits, too, including a Christmas Coat, Winter Rose, and Merry Christmas.

Robot Tactics X is hosting an event between December 20th and January 2nd. Throughout this festive period there will be a high uncommon item drop rate in new dungeons.

You’ll be able to pick up Christmas Bells and Christmas Wreaths in dungeons and exchange these for SSR Pilots, Mechs, and Class S Weapons. Hallelujah!

Finally, the Evil Awakening II event, live between December 22nd and December 26th, sees you completing festive missions and logging in every day to receive tons of free rewards.

That’s a lot of stuff to keep you busy over the festive period, so you’d better get started by heading to Game Hollywood Games right now.