Menu
HomeGame NewsDota 2 patch fixes a slew of bugs, but adds one more


The December 22 Dota 2 patch is relatively slim on the ground, simply fixing some bugs in the MOBA. Fans, however, have noticed that there’s a mistake with the new Silencer set that has overshadowed the update.

While the update itself isn’t particularly noteworthy, the introduction of the second collector’s cache is much more exciting. One of the many new cosmetics it drops is an epic set for Silencer, aptly entitled ‘Grand Suppressor.’

It sees the war-mage decked out in violet and gold robes, with a lengthy silver beard sweeping down his chest. The coolest part, though, is that the inside of his shield has been transformed into a huge tome, which is open at a biography page of the character that lists his in-game description and abilities.

It’s an awesome looking set, but when you look closer things get a little less magical. Specifically, one Dota 2 player has highlighted that, when you zoom in on the text on the book, it reads ‘Silincer’ instead of ‘Silencer’ – oops.

It’s a pretty minor detail, but it is vaguely concerning that Valve can’t spell the name of one of the game’s heroes. This will likely get updated with the next patch, but until then you’re playing Silincer, not Silencer – remember that if you don’t want cursed. 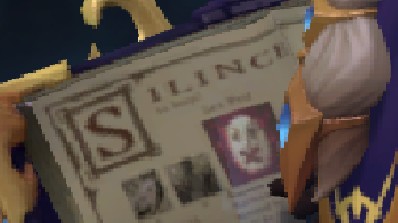 Below are the full patch notes for the December 22 Dota 2 update, courtesy of Valve: